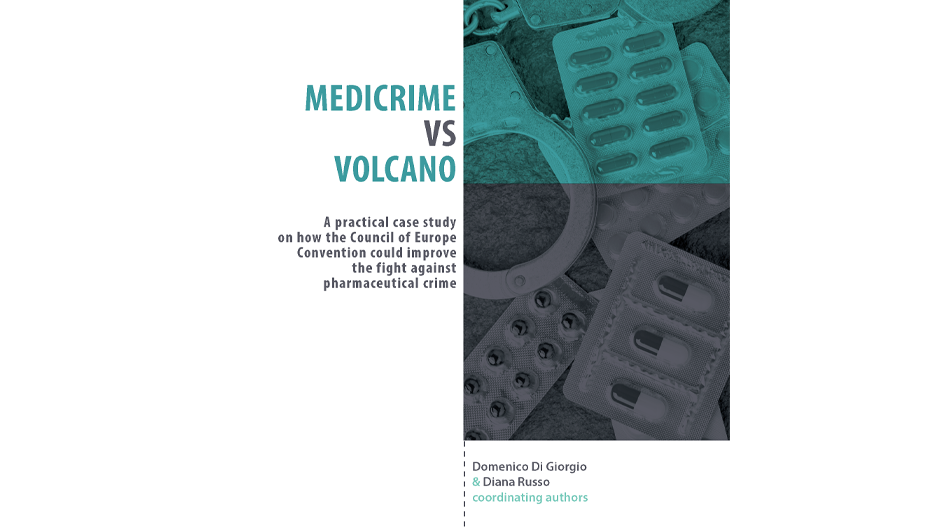 A recent study, "Medicrime vs Volcano: a practical case study on how the Council of Europe Convention could improve the fight against pharmaceutical crime", carried out within the framework of the Council of Europe MEDICRIME Convention has highlighted shortcomings of current legislative approaches in relation to the protection of patients against falsified medicines in Europe. The study, authored by Domenico Di Giorgio of the Italian Medicines Agency (AIFA), and Diana Russo, Public Prosecutor of Naples, Italy, with the support of the EDQM, focused on a real case from the 2014 “Operation Volcano”, which saw anti-cancer medicines stolen from Italian hospitals and reintroduced in distribution chains to be sold throughout Europe. The study shows how the MEDICRIME Convention would have supported the prosecution of the case and led to effective sanctions against perpetrators, making a case for the appropriate implementation of the convention.

Based on a survey of regulators and prosecutors in participating countries (Armenia, Belgium, Germany, Italy, Serbia and the United Kingdom), the study outcome highlighted the inadequacy of existing legislation on pharmaceutical crimes in light of their serious potential repercussions on public health. The study highlighted in particular shortcomings in traceability systems, the fragmentation of proceedings related to pharmaceutical crimes and insufficient options for accessory sanctions.

The survey showed that applicable criminal charges remained mostly generic and were not fit for the specific implications for public health that derive from falsifying medicines. From theft of goods or handling of stolen goods to criminal association – which can currently only be punished under provisions for mafia associations (Italy) or for conspiracy (UK) – most regulatory frameworks do not take into consideration the fact that reintroducing stolen medicines to markets represents a far greater risk for patients than ordinary thefts. Medicines that are not stored correctly or are tampered with may deprive unwitting patients of the care needed and negatively affect their health. Similarly, sanctions for manufacturing illegal medicinal products or for manipulating authentic medicines, although covered in most criminal codes, are often subordinate to proof of damage to patients or considered as a breach of trademark, contrary to the provisions in the MEDICRIME Convention, which foresees direct charges thanks to its focus on the potential risk for patients.

Other types of offences were also analysed in the study and compared with the legal framework provided by the MEDICRIME Convention. The very concept of “illegal possession of medicines” is not addressed by the legal systems of most countries concerned, which only prohibit the possession of illegal substances such as narcotics or psychoactive drugs. Moreover, the illegal export of goods can only be fined in European Union (EU) countries under provisions in EU directives requiring proper licences for trading medicines. For these reasons, sanctions have mostly resulted in simple suspensions of licences or similar administrative penalties. On the contrary, the framework provided by the MEDICRIME Convention specifically addresses the mere detention of falsified medicines, as well as the falsification of related documents, which is defined beyond simple fraud as a specific criminal act, with aggravating circumstances in cases where health professionals misuse their positions to support pharmaceutical crimes.

The study concluded that overall, applicable sanctions were not a sufficiently strong deterrent when weighed against the potential profits of falsifying medicines. Co-ordination and information were also seen as important aspects in need of improvement, due to the involvement of many different judicial authorities in cross-border investigations and often also within the same country. The study also pointed out that raising awareness of pharmaceutical crime within the judicial sector would pave the way for implementing good practices related to information sharing between prosecution officers.

“Operation Volcano” refers to a series of activities carried out after a German distributor reported having received defective vials of the anti-cancer medicine Herceptin® from a wholesaler in the UK in 2014. During controls, authorities discovered a scheme under which criminals would carry out robberies in Italy (mostly in hospital pharmacies or against transport operators) and then resell the medicines to authorised wholesalers through a system of fake invoices issued by sham wholesalers operating in numerous countries, including Hungary, Latvia, Cyprus and the Czech Republic. This way, stolen products were reintroduced to the EU single market and defective vials were seized by authorities in Germany, Finland, the UK and other EU member states.

AIFA co-ordinated a major investigation at European level together with other Italian institutions (police forces such as the Carabinieri NAS, the Ministry of Health and the Customs Agency) and provided support to authorities in other affected countries. The operation led to the arrest of more than 80 individuals.

The falsification of medical products and similar crimes are serious and truly global threats to public health, which involve a complete disparity between the relatively low risks incurred by perpetrators and the great risks that this illicit behaviour poses to the health of individual patients.

The MEDICRIME Convention, launched by the Council of Europe in 2011, specifically takes into account the widespread nature of pharmaceutical crime and proposes a dedicated system of legal standards and mechanisms of national and international co-operation that can undoubtedly help national legislators, regulators and legal professionals.